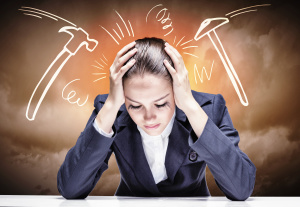 I don’t know about you, but I’ve had a pretty crazy couple of weeks with multiple exams and assignments due all around the same time, plus a bit of family stuff going on, as well as madly writing for a book proposal which is due in a couple of months’ time. So to say that I’ve been feeling a teensy, weensy bit stressed and overwhelmed is an understatement!

Have you ever felt this way?  Where you’re at a point of overwhelm that it almost paralyses you?

Well if you work shift work then I’m sure you have at some point in time, because it’s kind of similar to that feeling of working a string of early shifts in a row and trying to function on 4-5 hours of sleep a night AND keep it together!

It’s what we called overwhelm with a capital “O”!

You see, I had reached a point where I felt as though I had burnt my adrenal glands to a crisp with so many things on my plate (in addition to my University commitments) that I felt as though my head was spinning out of control.

I was in a state of sympathetic nervous system dominance, otherwise known as the “Fight or Flight” response which is essentially our body’s built in survival mechanism which thousands of years ago – came in handy whenever our ancestors were getting chased by a wild boar.

Luckily for us, we rarely get to see a wild boar let alone be chased by one however those feelings of stress can be somewhat similar, and our body doesn’t know the difference between a real boar and a fake one.

Unfortunately we live in a crazy kind of world today where it’s almost fashionable to say that we’re “so busy” all of the time. Kind of like it’s something that’s worthy of being presented with a trophy or standing first place on top of a podium.

But this ongoing state of “busy-ness” – where we have-to-be-busy-doing-fifty-things-at-once causes chronic stress on our already sleep-deprived bodies.  This suppresses our immune system even more and wreaks havoc on our hormones, which can ultimately lead to more serious illnesses later down the track.

So if you’re at a point where your body and brain aches from mental, emotional and physical fatigue then it might be time to just stop, breath and take stock of your current situation and let go of a couple of non-urgent things from your life.

For me, I needed to stop trying to be Superwoman (or is that Wonderwoman?!) and ditch a few of my projects and just concentrate on what matters most – my health.

Because let’s be honest, everything is always so much harder to do when you’re running on little sleep.

So go easy on yourself. Spend time nurturing yourself because not only do you deserve it – your body NEEDS IT when working 24/7.