Having grown up in rural NSW and watched my house burn to the ground when I was just 7-years old, the images that we’re seeing right now of widespread bushfires around Australia is nothing short of heartbreaking.

The sheer devastation of loss including wildlife, livestock, property, vegetation and even human life, is gut-wrenching to see.

It’s why I feel it’s fitting to give a special shout out to all the firefighters who are on the front line, risking their own lives to help others 24/7.

Here’s just a snippet as to why:

✔️ Many of these firefighters are experiencing sleep deprivation on a whole new level.
✔️ Their “shifts” are longer than anyone should ever have to work.
✔️ They are having minimal meal breaks – if any.
✔️ Many are volunteers who have also taken leave without pay 💰 from their “real” jobs.
✔️ Despite being physically and emotionally exhausted, they keep going because they don’t want to let their communities down.
✔️ They are working in an extremely dangerous and hazardous environment 🔥.
✔️ They are subjected to a level of emotional distress that no one ever wants to experience – seeing countless burned wildlife and livestock, (and in some cases, the loss of human life).
✔️ Many are also working in the community in which they live. So when a house 🏡, or heaven forbid, a life is lost, it affects them right to the core.

So please join me in sending out an enormous gratitude of thanks for all of the incredible work that they are doing.

And the next time you’re experiencing a crappy shift at work, please keep in mind what the fire fighters are currently having to endure.

It definitely puts things into perspective and why they are truly deserving of the title of “HERO” – as I’m sure you would agree. 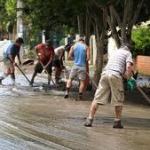