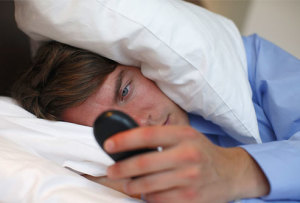 Now I’m going to show my age again here, but when I first started shift work nearly 20 years ago I desperately needed help with my fatigue. So much so I decided to spend an entire week at a Health Retreat in the beautiful hinterland region of the Gold Coast in Queensland, Australia in the hope that it may help to recharge my energy-depleted batteries.

Now as a part of the ‘terms and conditions’ for staying at this health retreat – all phones, newspapers, radios, TV’s and computers of any kind were contraband. Not only were we going to improve our physical health by exercising and eating well, but we were also going to clear out all of the mental clutter (be it for just one week) – to help rejuvenate our mind to where it should have been.

As I sat back in my car and began the long drive back along the highway I felt like I had been away for a month. The time away from phones, TV’s and computers had worked wonders on my mental and physical health.

Of course we can’t all go and book ourselves into a health retreat every week. A pity really because I must admit, I got quite used to having someone cook breakfast, lunch and dinner for me every single day! But even though it’s not easy to eliminate all of the mental ‘noise’, there are things that we can do to reduce it to one which is less noisy and distracting.

Of course things were a whole LOT different back in 1994.  For instance mobile phones were used for just that – making phone calls, but fast forward to 2014 we can now send texts, scroll the Internet, watch videos, comment on social media sites, get directions … it’s just endless!

Quite simply we are living in a world where we’re constantly subjected to information and interruptions which can be incredibly draining – both physically and mentally.

Now undeniably sleep deprivation rates as one of the largest causes of shift work fatigue but have you ever thought how your mobile phone may be adding to this fatigue?

If you are like me, you’re probably in denial because we all love our mobile phones – well outside of work anyway.

In fact I have to admit I’m even cringing a little as I write this post as I’m definitely guilty of spending way too much time glued to the phone and scrolling through social media sites!

However spending a lot of time on your mobile phone when you work shift work may not be particularly good for you because it can sap your energy.

In most workplaces today we are inundated with emails, mobile phones, alarms, pagers an array of other things, all vying to grab our attention.

In fact some studies have found emissions from mobile phones can even cause sleep disturbances and depression. Not a particularly good mix when you work shift work.

So given its 2014 and we’re living in such a high tech environment, it can be a bit tricky to eradicate all of this unwanted “noise” and constant interruptions. But there are things that you can do which can make a huge difference in your mental fatigue such as taking some time out to silence the mind. By this I mean shutting out all of the noise and chatter, and just relaxing – both mentally and physically.

When you silence the mind you block out incoming messages from entering both your physical and mental space.

It’s a bit like turning a switch to the ‘off’ position. Or putting it on pause, at the very least.

Try doing the following for just one day and notice how much better you feel both physically and mentally.

1. Turn off the TV. Engage in conversation instead of watching others in conversation on the telly. It’s much more restful when you don’t have to be subjected to the blaring ad breaks every 5 minutes.

2. Avoid Social Media. In today’s world so many of us have become glued to things like Facebook, Bing, Twitter and YouTube – it has quite literally taken over our life. Have a ‘No Social Media Day’ and get outside in the fresh air instead. Go for a walk, a swim or catch up with a friend and have a real conversation instead of one via a computer or hand held gadget.

3. Turn off your mobile phone. Believe it or not – you can survive without your mobile phone. If people want to contact you, they will find a way. Having your phone with you 24/7 is only adding to your mental clutter which in turn adds to your fatigue.

So if you really want to reduce your shift worker fatigue turn off your mobile phone, telly and computer – even if it is just for one day. Mankind has managed to survive without all of these things for hundreds of years so I’m sure you will be fine without them for just 24 hours :-).