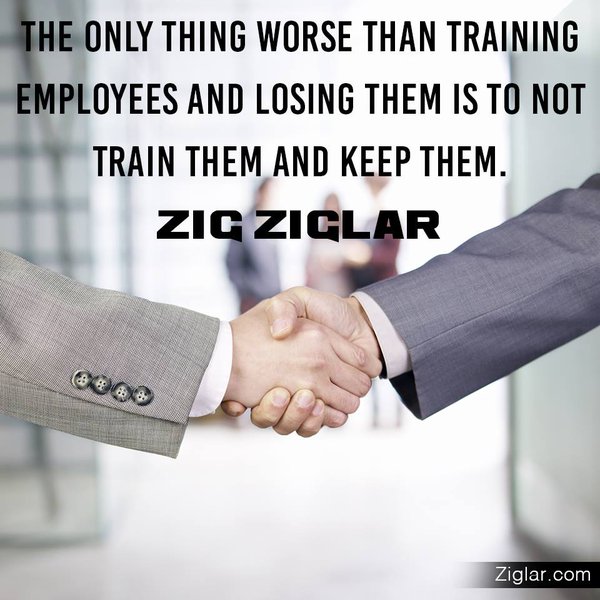 I stumbled across this quote today and it absolutely resonated with me.  As a former employee and trainer for Qantas, training people in a way so that they feel confident in their role was an area which I was always very passionate about.  In fact I’ll be perfectly honest with you, my position as a trainer for Qantas was probably one of the most rewarding jobs that I’ve ever held throughout my entire career within the aviation industry.

Since you cannot expect to have a highly successful (and equally profitable) business without a high calibre of employees, it goes without saying that organisations must never overlook this area of their business.

Training people at a high level not only empowers them, but it provides them with the confidence to do their job well instead of one which radiates mediocrity.

Quite simply staff training (or should I say lack of staff training) can make or break a business because poor customer service and/or poor product knowledge radiates unprofessionalism.

Think Apple or Google.  Both of these organisations train their staff exceptionally well because they understand the consequences if they don’t.  It’s much easier (and cheaper) to retain a customer than it is to acquire a new one and they really understand the importance of word of mouth.

But I have to say whilst the majority of training packages which I delivered during my employment with Qantas were focussed around systems and procedures, in the back of my mind I was always craving to do something more.  Something a little different that seems to be missing from many shift working organisations around the world, and that of course is to deliver a training program which is more personal, relatable and beneficial to the employees themselves as opposed to just being focused around the organisations’s strategic objectives.

Because let’s face it.  It’s not all about systems and procedures (which can actually be somewhat boring not only to teach, but to sit in on as a trainee as well).

It’s way more beneficial (and fun) to learn things which not only are going to help you to become better at your job, but also to be become much healthier too!

And this is the biggie for organisations – it creates loyalty, and with loyalty comes a sense of pride for who they are working for which has a positive flow on effect throughout the entire organisation.  In fact both internal and external customers benefit from well trained staff.

Of course the area of training which I’m referring to is on shift work health – something which I’ve become incredibly passionate about over the years (thanks to my own personal struggles) and which I hope to deliver as a training package in the future as a way to “give back”, or help others from going through some of the struggles that I went through when working 24/7.

How awesome would that be?!

So stay tuned everyone – I’ve got so many things in the pipeline at the moment.  One of which includes writing a book as well as preparing to launch a digital medium which will be incredibly relevant and beneficial to shift workers all around the world – not to mention being heaps of fun and engaging as well!